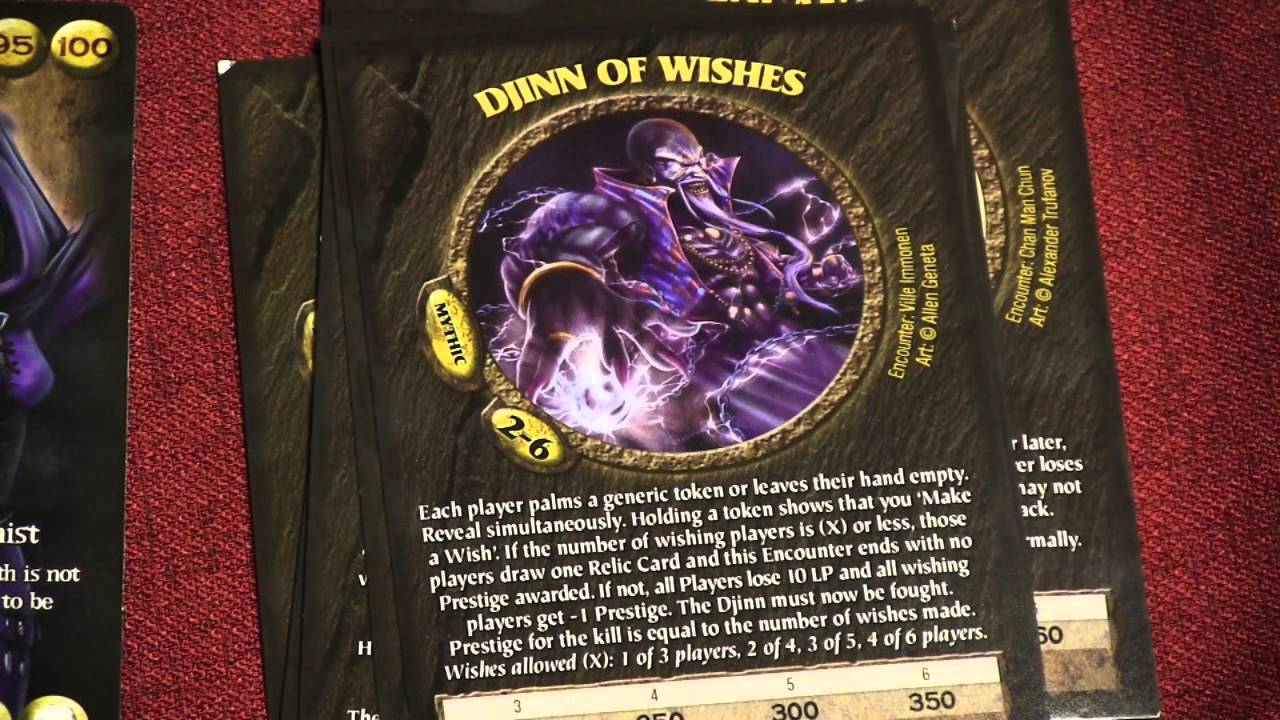 Who are your real friends? – Why I love Cutthroat Caverns

Ever get together with family or close friends to play a game and, somewhere in the middle of play, you looked at another player–someone you once trusted and believed would always have your back–and said, “I can’t believe you would do that to me! Who are you?”

Yeah. Playing Cutthroat Caverns is pretty much like that from beginning to end. Fair warning, this game is not for everyone, but it’s one I will never turn down a chance to play. When describing it to those who’ve never tried it, I enjoy calling it a game of “collaborative betrayal.”

The premise of Cutthroat Caverns is simple. Your group of players is a dungeon-crawling party that has found some treasure and is now trying to get out alive from whatever depths they’ve plundered. However, on their way, they must battle through a number of encounters–mostly monsters with various nefarious abilities and/or nasty attacks. Each defeated encounter is worth a number of points. To win, a player must A. Survive to the end of the last encounter and B. Have the most points.

Here’s the twist: While teamwork is absolutely necessary to defeat the encounters, only the player who lands the killing blow on an encounter gets the points from it. 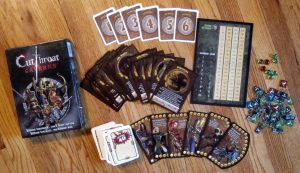 See where the fun comes in?

Gameplay in Cutthroat Caverns is relatively simple, with health trackers available for both encounter monsters and players (you reach zero, you be dead), and several categories of cards denoting attack damage, abilities, and a handful of items (mostly potions). After an encounter is revealed and the conditions of its attacks and defeat are determined, players then set their attacks before revealing them in turn until the encounter is dead…or the players are.

The main goal is to determine exactly how and when to undermine, neutralize, or otherwise alter the gameplay and the other players’ attacks so your attack is the one that defeats the encounter and wins you the points. That’s one of the reasons why I love this game. It isn’t just calculating defense and damage, but there’s a strong psychological element that pits your ability to anticipate what the others might be planning and twist it to your advantage.

The encounters are a huge part of the fun, too. Want a monster that targets the player who hits it for the most damage? The least damage? A monster that adds new encounters to the stack for every round it survives? Another encounter that spawns mini-monsters that must be defeated first? Or perhaps a creature that takes away one of your heard-earned encounter wins and returns it to the stack to be played again? The game provides all that and far more devious options.

Plus, you’ve got the option to heal other players to get points for yourself…but only if they give you permission. You can neutralize whole attacks on the fly, reduce damage to yourself, or force another player to skip their turn at a critical juncture.

The best way to go into Cutthroat Caverns is to accept that none of your plans are going to survive an encounter, much less the other players. You’re actively looking for that perfect moment to ruin another person’s success, right when they think it’s in their grasp. Admittedly, this may not be the game for you if you have a thin skin or a competitive streak that has landed you in jail a few times. But if you go in knowing that it’s going to be one hot mess from the start, Cutthroat Caverns can be highly satisfying and hilarious.