Write Strong Guest Post: “November 2008 my own body tried to kill me.”

The first time it was my heart. It turns out I have a genetic heart defect that runs in the family. I was doing some home remodeling in the basement and had what looked like a heart attack… at 29. At the ER they were taken aback. I was young. I wasn’t in too bad a shape, though I’d stopped weight lifting due to a shoulder injury for a while and gained a little. They kept asking if I’d been taking any recreational drugs, and how much I drank. Turns out I’m a square.

As a result of the heart catheterization to take a look inside the offending organ, I ended up getting blood clots. The pulmonary embolism from *that* destroyed some lung functionality and left me in the hospital again for an extended stay. When I recovered I was weak, lost my breath easily, not allowed to ever have caffeine again, and prohibited from just about forms of exercise besides walking because it could trigger my heart attack-like symptoms.

I’m stubborn, but the one-two punch took a lot out of me. Just getting my freelance work back on track took all my energy. And a few months later, my twin daughters were born. I mainly remember this stage through a muddled haze of exhaustion. At the end of it, I found I’d gained a lot of weight from the combination of desk-oriented job and inability to run or jump or lift or play. Just my attempts to go out and walk a block often left me with lung pain from the cold winter air that was so bad I ended up in the ER once. Occasionally effort or exhaustion would cause my heart to race so bad I’d also have to go back into the ER to be monitored. My optimism that I could get back to some semblance of normal life was dashed, and dashed yet again with each further ER visit.

A visit to the ER and a cardiac specialist in Montreal helped me turn the corner. The short visit there featured doctors who wanted me to focus on well being, and to psychologically come to terms with the fact that I’d never be healed, or the person I was in my 20s. “You are like someone with diabetes or asthma,” a cardiologist told me. “But your enemy is stress, exhaustion, or too much effort. Your job is to manage all these things, in moderation, so that you can live a long healthy life and work around this envelope.” If I managed it well, the doctor explained, I would be like his elderly patents with the very same genetic disorder.

But, the doctor said, I couldn’t ignore exercise. The heavier I got, the harder my heart would have to work. And for me… that really meant a likely shorter life.

With the promise of the doctor’s elderly patients ahead of me, wanting to see my children graduate, I set out to master how to work within my limits.

I had some advantages. One, I’ve been something of a life logger since 2003. And I knew more about fitness than many I talked to casually. So I had kept track of body fat, weight, as well as measurements of my waist, chest, arms and legs since 2003. I’d gotten into the habit due to gaining weight at my desk job of the time. I decided that like any researcher, I would read All The Books about body shaping. Most people seemed to read an article, or a popular book, or pick up advice from others. I set out to read everything from Arnold’s Encyclopedia to popular books. I covered 30-40 books, with an emphasis on books by weightlifters. I hated eating right, so I used all that to let myself get away with horrible eating habits, while still lifting and running enough to compensate. And I aimed for bulk, as I’d been a thin kid in high school. Being strong appealed to me, and I focused on short reps, massive weight.

After my late 2009 Canadian ER visit and a follow up visit with my own cardiologist (who also recommended I get leaner), I marked down the stats and could see on my excel chart just how much weight I’d gained. And it was more than just the scale weight, with no running or lifting, I hadn’t just gained, I’d lost muscle, so I’d gained more than was apparent than just subtracting my old weight from my new.

I couldn’t run or lift or jog. But I could walk. And, even though I exercised to not have to watch my food, I could control my food now.

I began to walk everyday, trying to add just a little bit more. Occasionally I’d trigger my tachycardia, but if I was pushing the envelope just a little, it was something I could rest and get over. In late 2009 I started with being able to walk a couple blocks without exhaustion due to the decreased lung function and easily triggered tachycardia (racing heart). I can now do a couple miles. I’m able to jog up the stairs from the basement now. I can, if ambling and paying close attention to how I’m feeling, push the walks up to the 2.5 mile range. So I’m stronger, healthier, and walk nearly every day.

Fortunately I live in a walkable town. The bank, grocery store, and post office are all half a mile away. Whenever I need some veggies, or to get a stamp, I nearly always walk to get it. That means almost every day I find a reason to get out and go a mile. And I try to walk it a little bit faster each time.

Lately my cardiologist said I ‘might’ try light resistance exercise. My rule is to not let my heart rate go up. So I started using my iPhone to test my heart rate and began with two pushups. Over the last four months, I’ve slowly added the occasional pushup, as long as it doesn’t raise my heart rate or make me feel like I’ve exerted too much pressure in my chest. I would have laughed to read this in my twenties, but I’m proud that I can now do fifteen pushups in a row without my heart rate rising too much.

That’s fairly uncontroversial. The tricky stuff is now what goes into my body. Since I can’t run or lift, bad food is doubly serious. In the past I just ate and then worked harder and it sort of balanced itself out as long as I ran.

I don’t have that option now.

In 2009 I used an app called “Lose It.” It’s basic calorie counting, which many people despise. I think a lot of people try to eat too little though. Having read about basic metabolic rates and lifting in those 30 or so books, I knew that if you eat too little you’ll fuck up your progress just as much as over eating. I figured out what my body’s minimum need was, and I never went below it! I stayed, mostly, within the lower and upper ranges, and usually saw encouraging, predictable results. With a daily walk, and the app, I was able to lose 30 pounds over two years. I ate a donut almost every day. It worked.

Of late, my wife and I have switched to a lower carb life. I acknowledge that the calorie counting takes a sort of huge investment in life-logging, to mark every calorie. But along with all the other data I tracked daily, it helped me frame up and understand how food affected my body. By tracking protein and carbohydrates and calories, I could see just how much fewer calories you eat if you get rid of processed carbohydrates (I could eat 10 apples for one donut, right?). I don’t believe in most of the stuff around lower carb, other than the idea of veggies and fruit being less calorically dense means I could get away with less discipline if I just avoided processed carbs (except for the occasional cheat day every couple weeks).

It’s been working for us. I still lose self discipline when I’m deep under deadline. But I have roughly the same measurements and body fat level as I did when I was 24 (slightly wider shoulders though), which has been quite an accomplishment for me. This winter I put on a few pounds that were hard to shake, but now that the sun is out and summer approaching, I’m hoping to find more excuses to swim and walk and eat fresh produce. Given the results last summer, I’m hoping to this year fit in the same same jeans as I did in college. It’s been a boost to my self confidence. It’s been a boost to my ability to write more (and thus, make more for my family).

It’s not perfect. I fall down a lot. But it’s like mastering anything else I’ve ever tried. I mess up, I go back to trying. And even after long stretches of mastery, I can have a free day and end up gaining a few pounds because I then spent all weekend eating all the kid’s pop tarts. But I do this as a writer too (miss days, fall apart, get distracted), and I know that if I get back on track, over the long haul, it gets easier and I know how to deal with the hiccups. For me, personally, I ask, what’s the alternative? Overloading my heart so that it’s weaker? Dying younger? I want to live, I want to reduce the chances of me going to the ER. I’ve been on forums and seen people with my disease who have just given up. The results are grim. So I keep at it. The gains are so much smaller than when I was in my 20s, but I look back at the fact that I could barely walk a block, and can now do 2-3 miles, and I think, maybe in another five years, I can do 5-6 if I keep slowly getting better. I want to walk one of those marathons some day, even if I can’t run it.

My cardiologist says that if I keep doing what I’ve been doing, the chances are that I’ll die of something else.

That’s actually the most positive, uplifting thing he’s ever told me. And I’m more committed to being fit, now, with a wonky heart, than I ever have been. It’s no surprise, I think, that I’m out writing and out-working my younger self as well. 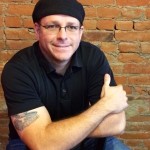 Tobias S. Buckell is a New York Times Bestselling author born in the Caribbean. He grew up in Grenada and spent time in the British and US Virgin Islands, which influence much of his work.

His novels and over 50 stories have been translated into 17 different languages. His work has been nominated for awards like the Hugo, Nebula, Prometheus, and the John W. Campbell Award for Best New Science Fiction Author.

He currently lives in Bluffton, Ohio with his wife, twin daughters, and a pair of dogs. He can be found online at www.TobiasBuckell.com