Cover reveal for The Cleaners #3: The Dustpan Cometh

I’ve been sitting on this for as long as I can, but it’s finally time to pull back the curtain! Book 3 of The Cleaners is arriving this April, with a planned pre-launch during Emerald City Comic Con (so, if you’re in the Seattle area, I hope you’re planning to attend). The Dustpan Cometh will be published by WordFire Press, continuing the story of the supernatural sanitation company, the Cleaners, as its staff of janitors, maids, plumbers, and more battle the forces of Corruption in all manner of mucky and murky forms. For those unfamiliar with the series so far, you still have time to check out Enter the Janitor and The Maids of Wrath before this one becomes available.

So, without further ado, I present the final cover! 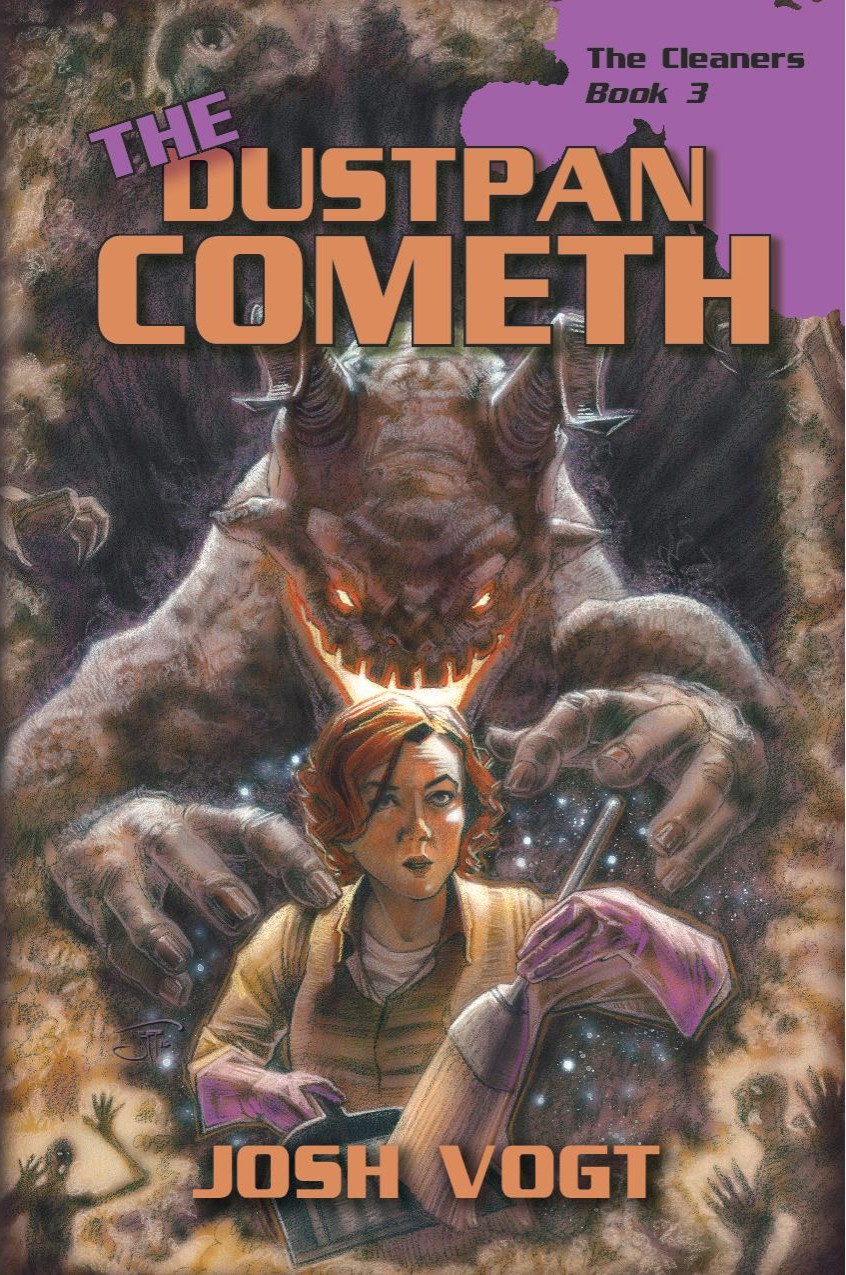 The cover art is by Jeff Herndon, who did the amazing covers for the first two books, and continues to bring what I think is a fun and unique style to the series! The extra cover elements were designed by Janet McDonald, via WordFire Press.

And here is the official plot description:

It’s back to school for Dani, whose new work-study position as a—what else?—janitor at her college provides the perfect front for her job with the Cleaners, the supernatural sanitation company keeping reality tidy and safe. The toughest part? Accepting that the forces of Corruption aren’t behind every squicky mess. Sometimes frat boy vomit is just frat boy vomit.

Then a real problem appears: Sydney, the entropy-wielding Scum whose touch turns anything to dust. He reminds her of the deal she made so he’d spare a child’s life, and it’s time to uphold her side of the bargain—by going on a date with him.

Back at Cleaners HQ, Ben is determined to restore his powers and has been submitting increasingly absurd ideas for doing so to the Employee Suggestion box. When a concept is unexpectedly approved, he becomes a target for his coworkers, who are all-too-eager to test the limits of his latest “theory.“

In the midst of the pair’s respective dilemmas, a strange form of Corruption strikes in the heart of Denver, transforming swaths of neighborhood parks into lifeless desert.

Scrambling to contain the disaster, the Cleaners pinpoint Sydney as the source and prepare to put him down at all costs. But after Dani encounters another potential culprit, she finds herself inexplicably defending her would-be beau. Even as her loyalties are questioned, she must still face her greatest challenge ever…

Wearing a dress in public.

Like the first two, The Dustpan Cometh will be available via Amazon and most other major online retailers in both paperback and e-book format, and hopefully should have an audiobook coming out this year as well. If you are able to attend ECCC, that might give you the best chance to get the earliest available copies of it (plus, you can get it signed). And I should have some review copies, both digital and print, available soon.

I’m excited to see the series continue, and I hope you are, too. Thanks to all my readers for supporting The Cleaners, and here’s to the ongoing adventure!