Blood in the Mist 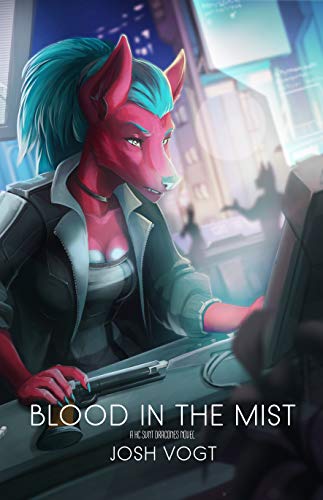 Being a cop is hard enough. In Olomaci City, though, it’s best suited for those with a death wish.

The Venusian urban-industrial hub froths with illicit activity, the stew of the city full of drug runners, gene-spliced vat-psychos, and would-be criminal masterminds that officers like Rio and her macro-sized wolf partner, Ran’l, are tasked to track down and eliminate.

At least Rio enjoys the work, finding odd solace in ruthlessly hunting the lowlife scum who prey on the innocent. But when she’s sent to retrieve an undercover agent whose cover has been blown, Rio discovers a far more twisted evil lurking beneath the city’s veneer of civility. What should’ve been a simple retrieval mission gets her squad locked in combat with a bunch of cultists who’ve formed a private army.

When she smoke clears, she’s left with a dozen bodies dead from ritualistic suicide. And the cult leader responsible for it all? He just vanished into thin air through a magic portal.

Now hearing voices in her head and seeing impossible visions everywhere she looks, Rio searches for answers. All she knows is the cult founder is plotting a repeat of the violence exhibited on that disastrous mission—this time with a far higher death toll. For this self-styled prophet believes he’s on the path to godhood, and why should anything like the slaughter of tens of thousands stand in the way of divinity?