In what I hope will prove to be a fun ongoing experiment, I now have two novellas published through the Kindle Worlds platform on Amazon. These stories are licensed tie-ins with Marcus Sakey‘s Brilliance Saga, in which human savants known as “brilliants” begin transforming the world in both marvelous and disturbing ways–bringing whole nations to the edge of a war that could mean the end of humanity as we know it. I had a fantastic time writing these stories and I think folks will have an equally fun experience in reading them!

A baffling string of jewelry thefts has been linked to possible abnorm criminal activity—a troubling development that has kept Agent Nick Cooper pulling late nights in the Equitable Services office, searching for a clue to the culprit. In his wildest theories, though, he never imagined a break in the investigation coming in the form of two boys—one of whom claims to be Sherlock Holmes while the other introduces himself as John Watson.

So begins the unlikeliest of adventures as Cooper teams up with elementary students whose personas seem sprung from the very pages of Sir Arthur Conan Doyle’s detective stories. If Cooper intends to stop the next robbery, he must rely on these strange kids and the case they’re determined to close. For the fictional Holmes had a singular foe…one equal in brilliance and cunning…and who this young Sherlock claims is now responsible for a crime spree worth millions. 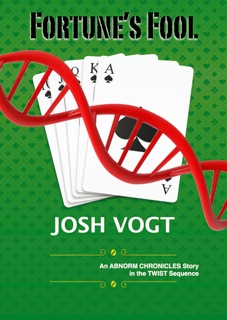 Waking up chained to a poker table in the middle of a warehouse, abnorm Ryan Emerson finds himself in the company of nine other unwilling players—all of them abducted twists with unique talents. Forced into a deadly game of Texas Hold ‘Em, Ryan must use all his wits to survive as many hands as possible; the instant his last chip is lost, so is his life. Yet what could their self-proclaimed genius of a captor possibly gain from such an insane setup?

At the same time, Agent Nick Cooper is investigating a possible kidnapping at the behest of an old acquaintance. What first appears to be an act of corporate espionage quickly takes a darker turn, plunging Agent Cooper into a race to halt a global security threat before more innocent lives are lost.

Yet even as both men edge closer to the truth, a much larger game is being played than they’d ever imagine…

Oh, and be sure to check out associated Kindle Worlds stories, such as Spiral, by fellow author David Boop, and Twist, by bestselling author Kevin J. Anderson.