I’m excited to have M. Darusha Wehm visiting the blog today! She’s participating in the Never Have, Never Will interview, which offers up some questions you may not usually see in most author conversations. Her latest book, Children of Arkadia, is out, and you can read all about it after the interview itself. Without further ado, let’s get to her answers!

The first novel I ever wrote was a just-for-fun challenge that I didn’t even intend to finish. I kind of love it still, because it was huge fun to write, but it’s a mess. It did, however, lead me to writing long form more seriously. In fact, about halfway through that first messy novel, I got an idea for a much better book and had to fight myself from writing that story. That idea became my first real novel, Beautiful Red. 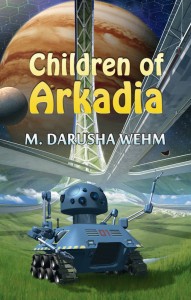 I’m kind of obsessed with time: human perceptions of time, the physics of time, the history of time, the politics of naming and measuring time… I could, and often do, go on. I really want to write a story that deeply addresses the aspects of time that fascinate me, a kind of combination fiction/non-fiction approach. It seems like a huge undertaking, so I keep putting it off. I might start it this year, though. But what is a year, really, when you think about it…

My science fiction detective series has a (SPOILER) trans* character. I wish I’d explored her character more as the stories went on. I deliberately didn’t make a big deal of her identity in the later books, because I wanted to show that her colleagues and friends celebrate her because of who she is, not in spite of her differences. However, now I feel like I missed an opportunity to show some of the specific struggles her character would have to deal with, and I wish I’d explored her story a little more.

Isabel Hernández, from Children of Arkadia, is a mercenary killer both by profession and predilection. She is especially dangerous because she believes that everything she does is necessary for her survival. I, of course, know better.

My stories all exist in the intersection of the future I long for and the future I fear, so I’d probably be inclined to visit all of them but live in none.

Much of the action in my SF detective series takes place in Guadalajara, Mexico and Nice, France. I’d never been to either place when I wrote the books, but I visited Nice last year (it’s lovely!) and lived in Mexico for six months (though I still have never been to Guadalajara).

“Write every day.” I’m not one of those writers who requires a visit from the muse and I’m fine with forcing it, but I also don’t feel like “daily words, rain or shine” helps me much. I’m a bit of a binge writer when I’m drafting anyway, so a day off here or there tends to help me galvanize my ideas.

I’ve always had a large vocabulary, a good grasp of grammar, and spelling comes quite easily to me. I do well at the mechanics of writing and self-editing comes fairly naturally.

Distress by Greg Egan. There are many books I love that I’d be inordinately proud to have written, but that’s the one where as soon as I finished it I said, “Damn, I wish I’d written that.” Quantum physics, deciphering human relationships, exploring the continuum of gender – Distress has it all!

Crafting a compelling and beautiful story. I’m not a natural plotter — I tend to get a neat idea, then dig around for a story to let the idea ride upon. Weaving big ideas and cool stories together is a never-ending challenge.

I hate having to categorize my work. Even though all my published novels fall easily into the Science Fiction bin, my current projects are a lot harder to classify. And even my obviously SFnal work has plenty of other taxonomies that could be applied equally well. Politics, mystery, suspense, romance, travel, identity… these aspects are at least as important as the futuristic setting of the stories.

I’d never do one of those guerilla publicity stunts that looks like a real event but turns out to be just a bunch of actors, like stage an elaborately choreographed recreation of the revolutionary urban battle which appears near the beginning of the story.

That would be totally outside the budget.

“Would you be interested in becoming the Writer-In-Residence at the new space colony we’re putting up in orbit thanks to this trunk full of cash and rock solidly engineered plan?”

“My bag is already packed.”

Children of Arkadia: Kaus wants nothing more than to be loved while its human counterpart, Raj Patel, believes fervently in freedom. Arkadia, one of four space stations circling Jupiter, was to be a refuge for all who fought the corrupt systems of old Earth, a haven where both humans and Artificial Intelligences could be happy and free. But the old prejudices and desires are still at play and, no matter how well-meaning its citizens, the children of Arkadia have tough compromises to make.

When the future of humanity is at stake, which will prove more powerful: freedom or happiness? What sacrifices will Kaus, Raj, and the rest of Arkadia’s residents have to make to survive? 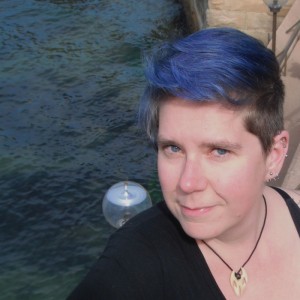 M. Darusha Wehm is the three-time Parsec Award shortlisted author of the novels Beautiful Red, Self Made, Act of Will and The Beauty of Our Weapons. Her next novel, Children of Arkadia, is forthcoming from Bundoran Press on April 28, 2015. Her short fiction has appeared in many venues, including Andromeda Spaceways Inflight Magazine, Toasted Cake and Escape Pod. She is the editor of the crime and mystery magazine Plan B.

She is from Canada, but currently lives in Wellington, New Zealand after spending the past several years traveling at sea on her sailboat. For more information, visit http://darusha.ca.