The Never Have, Never Will Author Interview with Lawrence M. Schoen

Lawrence M. Schoen joins us for a guest interview in the latest Never Have, Never Will installment! Here he talks about werewolf zombies, black market Russian beef mafia enforcers, and his latest book, Barsk (which, having a chance to read an early copy, I can wholeheartedly recommend for anyone who loves unique stories and fascinating characters!).

I have a short story about aliens and languages here on Earth that are going extinct and I can’t tell you any more about it without giving away spoilers. The parts that I’m not mentioning, if done right, will be so poignant that every reader will cry and demand that I be given all the awards. ALL OF THEM! Alas, although I have the idea for the story all mapped out, I’m not yet good enough of a writer to carry it off. But maybe someday soon…

I’ve always wanted to write a werewolf story that is also a zombie story, but doesn’t follow the tropes of either and isn’t a horror story. Bonus points if I can make it a musical comedy story while managing to play it straight at the same time. Really, it’s all about the challenge of taking the reader’s expectations about overworn tropes, turning them all on their ear, while remembering that all of that is just background to the real meat of the story, which must contain insight into the human condition. No, seriously.

What, you mean besides “all of them at one time or another?” Seriously, I’m a subscriber to the notion that a story is never completed, merely abandoned (or snatched away by an editor). I can see the growth in my skills as an author by looking at my work over time, and when I look back at earlier stuff I find myself cringing at one thing or another and wishing I could go back and change it. But I can’t, and that’s fine, because those differences shaped me to become the writer I am today (just as at some future date I’ll look back at today’s prose and find fault in it).

There’s a character in one of the Amazing Conroy stories (“Buffalogenesis”) who is a butcher and an enforcer for the black market Russian beef mafia. He also possesses the ability to telepathically track you and enter and control your dreams. He’s chopped the arms off characters, both figuratively in their dreams and literally in their waking (albeit fictional) lives. So, forget dark alleys, I don’t want to meet this guy in my sleep or in an abattoir.

Okay, this is a trick question, and here’s why. I’m someone who doesn’t write dystopias. Rather, when I create a city or a world for my characters to wander through, it’s an interesting place (arguably a character in its own right). I’d love to visit Barsk or any of the other planets of the Alliance that I mention in the book (as well as the many others that are in my notes). And the places that Conroy has traveled to are nothing short of fascinating. What kind of sick authors do you interview who engage in inventing places they don’t want to go? That’s… crazy!

I’ve returned to Mexico several times in various stories, in particular the sites of vanished Mayan cities. I’d love to visit Uxmal or Palenque or any of a dozen others. There’s something about those lost cities that grabs my imagination and won’t let go. This may be why I’m working on a new series about just such places.

I’ve no doubt there are many, but “never” is a tricky thing. The best advice I’ve ever gotten was to write every day, and there was a time when I did this, religiously, for more than a year. I wrote on holidays, when I was sick, when I was traveling, when I was overloaded with too many other tasks. It was effective and I produced more words than I ever had before or since in that span. But there were also days where the writing was mechanical and joyless because of it, and I’ve since abandoned that excellent advice. Nowadays, I prefer to have the intention to write every day, and if it happens, yay! And if not, hey, there’s tomorrow.

Probably characterization. I don’t know why, but characters come easy to me. If they don’t, then I’m not moved to write, because I don’t yet have anything to say. The character is the starting point for me. That blend of voice and motivation and history and flaws made manifest and given flesh. That’s not to say it’s easy, but it’s never been a problem.

This is one of those questions that will get you a different answer depending on what day you happen to ask it. There are half a dozen Zelazny novels that I can easily see popping up, several by China Mieville, at least two by Le Guin. Today, I’m going to point at Scott Lynch’s The Lies of Locke Lamora. The hoops he jumps through (and lures his readers through) are dazzling and raw fun.

Plot. I have to struggle to create conflict in my fiction. My default position is to create interesting vignettes — intriguing characters engaging one another in scintillating dialogue. I find this satisfying but apparently most readers want something to actually happen in the writing. Sigh.

Publicity. More and more it seems that authors are spending time pimping their work instead of writing more of it or writing it better. It’s the sort of thing that makes me long for the days of having a wealthy patron so you were freed up to just write. Did those days ever really exist, or is it like the fanciful longing for the “good ol’ days” which in our minds seem simple and lovely and have been conveniently scrubbed of early death, crippling disease, brutal intolerance, and a dearth of technological convenience.

I like to think I would never compromise my family. It’s one thing for me to whore myself out for my art, that’s my choice, but it’s flat out, inexcusably wrong to throw my family into that spotlight. This applies to my dog too.

When the characters in your head become so vivid, so real, that you can have conversations with them, when the creative process gets to that point where it seems like they are actively telling you their stories, do you ever tell them, “hush, let’s not talk about that story just now?” 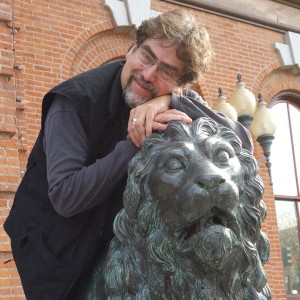 Lawrence M. Schoen holds a Ph.D. in cognitive psychology, has been nominated for the Campbell, Hugo, and Nebula awards, is a world authority on the Klingon language, operates the small press Paper Golem, and is a practicing hypnotherapist specializing in authors’ issues.

His previous science fiction includes many light and humorous adventures of a space-faring stage hypnotist and his alien animal companion. His most recent book, Barsk, takes a very different tone, exploring issues of prophecy, intolerance, friendship, conspiracy, and loyalty, and redefines the continua between life and death. He lives near Philadelphia, Pennsylvania with his wife and their dog