I’ve always hated cardio. So why, this summer, did I train for (and complete) my first triathlon?

My fitness (and philosophical) nonpareil is Conan the Cimmerian. That guy is strong. And tough, and nimble, and flexible. Even better, to my mind at least: he maintains his level of overall fitness in order to be able to do stuff, not out of a sense of vanity. You think Conan cares about counting carbs so that his six pack stands out perfectly? Or worries about how he looks in a loincloth and breastplate? No. Conan cares about having enough strength to climb (and then sprint the hell away from) the Tower of the Elephant. He needs to be tough enough to swing an enormous sword hard enough to chop someone in half. He cultivates stamina in order to rig countless traps for his enemies, and hardiness to be able to walk across frozen plains in search of some frost giant’s daughter. Call me crazy, or a nerd, or out of touch with reality, but I find the above to be more interesting overall fitness goals than striving for a particular body fat percentage and or getting up to max intensity on the elliptical treadmill.

Speaking of the elliptical, I’ve always found gym cardio workouts boring—and, well… a little pointless. Putting in hours on the exercise bike or elliptical has not made me a better cyclist or runner. Not that they’re supposed to, I know. I mean, I appreciate the health benefits of gym cardio—as well as its accessibility for people with joint issues (which, trust me, I’ve endured) and as you can see by things such as these recumbent bike reviews, some machines are much better for those that are rehabilitating after joint surgery or injuries etc, and convenience when the weather is bad (again a reality for me, in Colorado). But most of the time none of that is worth the abysmal monotony of an hour sweating indoors, watching a dubious assessment of every calorie I burn on the display. Any time I’ve tried to get into a gym cardio habit I’ve fallen out of it, because I can’t stand how dang dull it is. For those who are able to maintain a practice with either, I have nothing but the utmost respect. You have more patience than I ever will.

Now, on the other hand, I’ve always found cardiovascular activities pretty enjoyable. Hiking is great. It’s an adventure! Running is terrible, but you get to go places, and see dogs, and urban wildlife, and the change in the seasons happening right before your eyes. And, when the going gets tough, or you’re having a bad day, you can daydream about how friggin sweet it will be when “they” come after you for stealing some legendary gem or weapon, and you’re able to outdistance them. Same with cycling. Same—and more—for swimming, which is the only athletic pursuit I’ve ever been any good at. (Plus, when you have to cross some river on that aforementioned snatch-and-grab mission, you’ll be so far ahead of the game it’s not even funny.)

I live in Boulder, Colorado, one of the fittest cities in one of the fittest states in America. People here are insanely athletic. They run, cycle, swim, hike, do vinyasa flow yoga and goodness knows what else. Every SUV has one of those (13.1) or (26.2) stickers on the back, and a bike rack, too. It’s such a fit city there’s hardly anything else to do but exercise. Seriously, there’s like one good bar here.

Even living in such a fit city, I had fallen into a rut. I was burning out on the athletic stuff I’d been doing, and needed something new.

So I signed up for a triathlon.

It was a strange decision on my part. I hadn’t enjoyed either of my previous racing experiences (a standard 5k run, and the Warrior Dash, which is was just a 5k with silly obstacles). But a triathlon just seemed… different. I liked that it would incorporate my sole strength (swimming). I liked the appeal of being athletically tested across disciplines. And I liked the kind of… barbarian-ness of the whole thing. Swim a lake! Ride for miles! Run! Sure, you’re girding your loins with amphibious gear instead of a furry loincloth, and mounting a bike instead of a horse, but I am a ridiculous person with an overactive imagination.

I looked around at the many, many triathlons in the Boulder area, and decided on the Without Limits Oktoberfest Sprint Triathlon, in Longmont. That would give me the most possible time to train: fifteen weeks. I read a few online training plans and decided to combine several in such a way that didn’t require I purchase a thousand dollars worth of gear and/or monitor my heart rate. Anyways, finishing in under 2 hours was my only goal. That meant, knowing my strengths and weaknesses (I suck at running) I’d need to do the ½ mile swim in under 20 minutes, the 13-mile ride in under an hour, and the 5k run in under 40 minutes. This seemed reasonable.

Here’s essentially what I did:

I just followed “Couch to 5k,” until I could gasp my way through 3.1 miles. Then I just did two 5k maintenance runs a week, sometimes paired with another discipline (“brick” workouts, as real triathletes call them, meaning, say, an 8 mile ride and then a 3 mile run). I chose Couch to 5k because I was pretty much at zero for running. I hated running when I began. I still hate it, frankly. But, everyone has a least favorite discipline, and, as I would sing to myself sometimes, when I felt uninspired, “I don’t care if you hate this, you signed up for a triathlon.” Pretty catchy.

I could bike about 45 minutes comfortably when I began. I bought a bike computer and began to work on my speed/train up my endurance for the 13 mile ride, slowly, so as to get my joints (and, um, my butt) used to everything. I did two rides a week, sometimes three, and made sure there were several hills to conquer on every ride, as I assumed there would be some on the course (I was correct).

It was hard not to do more swimming than I needed, because I love it. But, it is tiring, and I needed to put my experience points into my weaker disciplines. For the first several weeks I did an “endurance” swim, just going as long as I could, and then a sprinting workout, to increase my speed.

Then came the interesting stuff. Once I was comfortable swimming hard for over 1k meters, I began training in open water. The swim would be in Union Reservoir, which would be colder than the pool (the temperature on race day was 69 degrees, and I didn’t rent a wet suit), choppier, darker, and weirder. And… I had never done open water swimming before. I’d swum in the ocean, just messing around, but not in a slimy lake full of other weirdos trying to swim past, over, or around me. So, to prepare for this, I went several times to the Boulder Reservoir, where there was an open water swim course of either 650m or 1000m.

You had to get there early. Like, it opened at 6:15 AM and closed at 7:40 AM so if you wanted to hit the 1k, or do more than one circuit… yeah. Woof. But, I did it. Fear is an excellent motivator. Not fear of the swim itself, which I knew I could do, nor of the conditions, which I assumed would be annoying but fine. No, it was fear of looking like a total moron on Race Day, wading into a lake with no idea wtf was in store for me.

I confess I didn’t do much other than my normal routine during tri training. I made a few more power shakes than I usually gulp in a week (banana, plant-based protein, alternative milk, chia, flax, and kale, mmm) and tried not to overeat. In general, I eat really healthy, because I enjoy it, so I didn’t need to overhaul my usual meals. Plus, when I Googled “nutrition for sprint tri” I got about thirty thousand insane websites and online fora recommending I do some kind of math to determine how much protein, carbohydrate, and fat I eat, to the gram, based on my weight, height, sweating tendencies, and, I dunno, a bunch of other crap. Nope.

When it came to fueling my workouts, especially longer bricks, I turned to plant-based gels, “blocks,” coconut water, and just good old bananas. Worked for me!

I’m happy to report it went great! I came in well within the times I desired, and crossed the finish line grinning like a maniac from the insane endorphin high. The swim was terrible, as it was a windy day and the lake was choppy (and at one point someone in a jet ski almost swamped me riding by, but I learned later they were rescuing another swimmer, so okay). But the ride and run went great. I felt like such a badass barbarian the whole time, when my body got warmed up and I was moving well—I had trained for this, and it paid off in the end.

And I wasn’t the only one out there for totally dorky reasons. During the run, a woman, 48 years old (they ink your age on your leg) passed me, and I saw she had a Hunger Games tattoo on her shoulder.

“Thanks!” she said over her shoulder. “The series inspired me to train for my first tri! Then I got addicted!”

“May the odds be ever in your favor!” I replied.

She grinned at me, and trotted off, leaving me in the dust, but with a sense of camaraderie. I wasn’t the only one out there that day who felt inspired to train for a triathlon out of admiration for a fictional character’s strength and endurance.

And I might have gotten a little addicted, too—to the training, and the amazing sense of accomplishment upon finishing. I can’t wait for next year’s season to start! 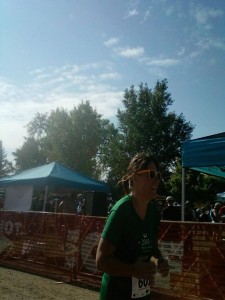 Molly Tanzer is the Sydney J. Bounds and Wonderland Book Award-nominated author of A Pretty Mouth (Lazy Fascist, 2012), Rumbullion, and Other Liminal Libations (Egaeus, 2013), the forthcoming Vermilion (Word Horde, 2015), and a second novel that will come out in 2015 — but she can’t say anything further about that yet, on pain of death. Her short fiction has appeared or is forthcoming in, among many other places, The Book of Cthulhu (I and II), Strange Aeons, and The Book of the Dead. She lives in Boulder, CO with her husband and a very bad cat. When not writing, she enjoys mixing cocktails, experimenting with Korean cooking, and (as of recently) training for triathlons. She tweets @molly_the_tanz, and blogs — infrequently — at http://mollytanzer.com.

Author. Editor. Freelancer. Made out of meat.More about Josh Vogt...
If you have read a lot of urban fantasy, love it, but want to find something totally innovative, check out this series. Supernatural sanitation workers! That says it all.~Beth Cato, author of The Clockwork Dagger series