The “Never Have, Never Will” Author Interview with Beth Cato

Beth Cato joins us today for another round of the Never Have, Never will interview! Here she talks about writing advice, gremlin pee, slimeball tea salesmen, and how hard times in life inspired her stories. Without further ado… 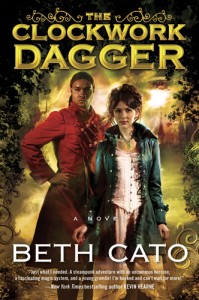 I wrote a story about four years ago now called “The Blessed Hands of the Sainted Fool.” It was light steampunk with a romantic element. I sent it out to ten markets. No one wanted it. That made me wistful and sad. When I was pondering a new novel to write, I thought of a scene from that story: an airship flying over this blessed, illuminated stone road. That ended up being the initial spark for THE CLOCKWORK DAGGER, my novel from Harper Voyager, and the story characters even play small yet important roles.

I love historical fiction. I have done several stories set during the Civil War and Old West, and I would like to explore more facets of that period and add speculative elements. There’s so much potential there that it’s overwhelming.

That’s a big worry with my novels in particular. I think that’s one reason I’m glad for plotting THE CLOCKWORK DAGGER as a duology. Everything fits together pretty tightly. I didn’t have to worry about a middle book.

There’s a character in THE CLOCKWORK DAGGER named Mr. Drury. He’s a traveling tea salesmen and a total slimeball. Touchy-feely in a dominating, patronizing way. I’ve known guys like that and I put up with nonsense I shouldn’t have. I hope that the next time I confront that sort, I’m not afraid to fight back.

My books have a capital city named Mercia that’s like a steampunk Coruscant, with a skyline of towers and factories belching putrid smoke. The place is rife with poverty, refugees, and disease, and a male population maimed after fifty years of near-constant warfare. Buildings and people rot. It’s not a very nice place.

I recently wrote a story set in my hometown of Hanford, California, in 1880. I would love to see how that part of California looked a century before I was born. If I had a time machine, that’s where I would go, and then go further back to see how it was before any agricultural settlements existed. 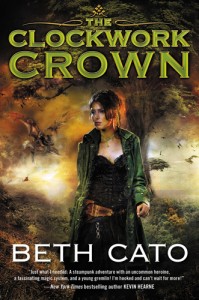 “Don’t listen to what other people say.” It’s a black and white statement that sets up a writer for failure. You have to pick and choose what advice and criticism to accept. If you avoid comments entirely, it’s foolhardy and arrogant.

Descriptions. I have a natural knack for them and can go on and on and on. I’m very attuned to sensory things around me in reality, so I can evoke that in my writing… and I’m often asked to tone things down a bit. My agent made a note to me once that I needed to “cut out the gremlin pee.” I thought I was making things more realistic!

*laughs* Probably THE SPARROW by Mary Doria Russell. It’s one of the best books I have ever read. It’s intelligent and emotionally devastating. I want to be at that level someday, but I don’t know if it will ever happen.

Oh, there’s plenty of room to improve in many aspects. A lot of times it seems I get the main plot okay in the first draft, but necessary subplots are still wishy-washy for a few more drafts. That’s where I really rely on critiques to find those weaknesses.

THE WAITING. Good grief. Editors, whether they work for a small press or the Big Five, are always buried in manuscripts. The wheels grind slowly. It’s torture for any writer to wait for word on a short story, and it’s even worse when it’s a novel.

Show skin! One of the wonderful things about steampunk is that it’s not difficult to dress up for conventions in something that’s modest but still very flattering.

Do you wish you could give writing advice to your younger self?

Yes. As a kid I wanted to be a novelist. That dream withered and died when I was a teenager. I had no confidence, no ability to take rejection, and a lot of family pressure to not write fantasy (my soul was in peril, etc.). I stopped writing what I wanted to write for almost ten years.

I wish I could tell my younger self to keep writing, and most of all, keeping reading fantasy. But this is a catch 22. I needed that time to grow up, too. To suffer and live and endure my first jobs and my husband’s deployments. Those hard times brought a lot of fuel to my writing. 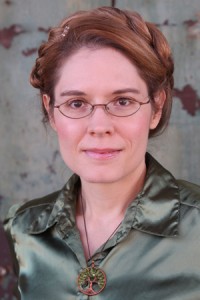 Beth Cato is the author of THE CLOCKWORK DAGGER steampunk fantasy series from Harper Voyager. Her website is BethCato.com.

THE CLOCKWORK DAGGER is out now. The second book, THE CLOCKWORK CROWN is out June 9th. Here is more about the start of the series…

Full of magic, mystery, and romance, an enchanting steampunk fantasy debut in the bestselling vein of Trudi Canavan and Gail Carriger.

Orphaned as a child, Octavia Leander was doomed to grow up on the streets until Miss Percival saved her and taught her to become a medician. Gifted with incredible powers, the young healer is about to embark on her first mission, visiting suffering cities in the far reaches of the war-scarred realm. But the airship on which she is traveling is plagued by a series of strange and disturbing occurrences, including murder, and Octavia herself is threatened.

Suddenly, she is caught up in a flurry of intrigue: the dashingly attractive steward may be one of the infamous Clockwork Daggers—the Queen’s spies and assassins—and her cabin-mate harbors disturbing secrets. But the danger is only beginning, for Octavia discovers that the deadly conspiracy aboard the airship may reach the crown itself.