A lot’s been going on on Joshville lately. (Don’t worry. I Google-mapped both Joshtown and Joshville and found no results).

It’s been just over a month since I officially up and moved from Denver to Seattle (Redmond, technically) to work for
Paizo as an editor. Not regretting it one bit, though I certainly miss the family and friends from whence I came. But my new team is fantastic, the work is fun and satisfying, and I’m enjoying exploring the area a little each weekend. Plus, I’ve been able to hang out some with other authors, gamers, freelancers, and folks I know from the con circuit who already live in the area. Good times and can’t wait for more! 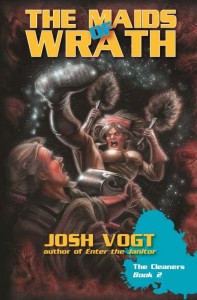 On the writing side, a couple of updates. First, The Maids of Wrath launch–planned for this month–is going to be delayed a few months. While the book and art are finished, I talked with my publisher and we agreed that it felt a bit crunched trying to rush it to production a little later in the game than planned. So rather than risk it getting lost in the holiday muddle, we decided to launch it in 2016, during the next Emerald City Comic Con. That just so happens to be based right here where I live, so I’ll be able to actually be present during a bigger book launch blowout! I know some folks were anticipating it sooner

(And, hey, if you want, the offer to get an advance review copy in exchange for a review remains open)

In other news, I’ve signed on to write the first novel set in the HC SVNT DRACONES roleplaying setting! This is a post-humanity scifi universe where a new species known as Vectors–think uplifted creatures derived from all branches of the animal kingdom–have outlived their human creators and are now discovering their future and fate in the galaxy.

Thanks to Pierce Frasier for bringing me on there. We’ve got a great story all set to tell, and I’m gearing up to bring that setting to life. It’s going to be quite the adventure.

In the meantime, I’ll continue discovering what my new adventure in the Seattle area and at Paizo have in store for me. Onward and upward.

Author. Editor. Freelancer. Made out of meat.More about Josh Vogt...
If you’re looking for a fun, fast-paced adventure, give Enter the Janitor a read.~A Fantastical Librarian