Blog Hop: How/Why I Write and 3 Writers You Should Check Out!

Looks like I’ve been drawn into a chain of blogging madness via Howard Jones, who tagged me in his own blog hopping post. So either I put up a post of my own, answering questions about My Writing Process and send the challenge onward or be forever held prisoner by my cowardice. I just met Howard for the first time at this year’s Gen Con along with several other Pathfinder Tales authors, and had a fantastic time talking and hanging out throughout various meals, bar gatherings, and the Writer’s Symposium. Here’s a good bit about him, for you curious souls:

Howard Jones’s debut historical fantasy novel, The Desert of Souls (Thomas Dunne Books 2011), was widely acclaimed by influential publications like Library Journal, Kirkus, and Publisher’s Weekly, made Kirkus’ New and Notable list for 2011, and was on both Locus’s Recommended Reading List and the Barnes and Noble Best Fantasy Releases list of 2011. Its sequel, The Bones of the Old Ones, made the Barnes and Noble Best Fantasy Release of 2013 and received a starred review from Publisher’s Weekly. He is the author of two Pathfinder novels, Plague of Shadows and Stalking the Beast, and an e-collection of short stories featuring the heroes from his historical fantasy novels, The Waters of Eternity. Howard assembled and edited eight collections of Harold Lamb’s historical fiction for the University of Nebraska Press. He served as Managing Editor of Black Gate magazine from 2004 onward, and still blogs regularly at the magazine web site.

Okay, now on to the question challenge…

Seems these days I’m never just working on *one* thing, especially since I freelance full-time…and while some of that freelancing is more the corporate copywriting type, I’ve also branched out into writing for RPG developers and publishers, often in a tie-in fiction fashion. I’ve got a variety of projects in differing stage. One is my first Pathfinder Tales novel, Forge of Ashes, set for April 2015 (it’s listed in Paizo’s official product catalog, so I figured it’s safe to mention with a little more certainty). This is currently undergoing edits/revisions. Beyond that, I have two urban fantasy novels I’m revising and a revolving selection of short stories to either finish or refine. I’m also edging into a new epic fantasy of my own, just 10k words so far, and worldbuilding for another concept. On top of all that, I just sent in an outline for a horror adventure story that I’ll provide more details on once a contract is actually in place–but it’s an exciting project to work on!

Toss in RPG sourcebooks, adventure modules, and more onto that pile. I like having options. Let’s just say that.

2. How does my work differ from others of its genre? 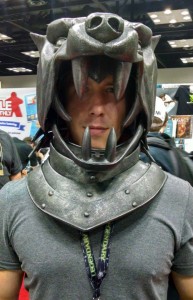 I’ll do a more official post on the Forge of Ashes plot, but for starters, it’s going to veer more into dwarven territory and culture than other Pathfinder Tales books have so far, as well as delve into plenty of unexplored dark corners of Golarion. I believe it’s the first time a dwarf (female dwarf, in fact!) takes the lead in one of these tales, and I’m excited to see how she’s received.

When not working on novels or longer stories, I oddly find myself veering over into flash fiction (1k words or less) quite often. Something about such a short-short form appeals to me; within flash fiction, I also tend to play around a lot with all-dialogue formats. My latest piece, “The Door-to-Door Salesthing from Planet X,” will be popping up in the UFO3 anthology out in October!

I don’t doubt that my predilection for writing the speculative genres comes from growing up reading them. A voracious appetite for fantasy and scifi books as a tyke convinced me those were the best worlds to play in, and I still want to spend as much time there as possible. It’s actually quite difficult for me to write a “normal” story where nothing supernatural or sci-fi-ish (yeah so a word uh huh) happens. Even if I set out to write a scene set in the mundane, before you know it there’s spells being flung about and monsters oozing out of the cursed woodwork. When my mind starts asking, “What if?” it doesn’t stop at, “What if they were actually in love all along and separated by a series of miscommunications?” It asks, “What if they were actually rabid werebears in another life and they’re separated by their tendency to try and maul each to death other unless they recover their clan’s unholy relic?” Anything less is…well…a tad boring for me, and being bored is the bane of my existence.

It’s in the blood and bones at this point. There’s no cure for me. That’s right. I suppose I just compared writing speculative fiction to having

an incurable disease. Are there those who would disagree?

4. How does my writing process work?

I actually posted an article a while back on the Snowflake Method, which forms the groundwork of most of my novel outlining process. I discovered quite early on that I’m a huge plotter. The more I outline upfront, the better I draft. Otherwise, I keep hitting points where I have too little clue as to what happens next and progress grinds to a halt. If I at least have an idea of my end goal or what the point of a scene is, I’m far more equipped to make it successful. The Pathfinder Tales novel involved my most exhaustive outline yet, but also proceeded to be my fastest draft to date simply because I’d already paved the way from beginning to end.

Recognize that this doesn’t take away my joy of discovery or flexibility during the actual writing. Just because I know what’s going to happen doesn’t mean I have any idea how. Characters can come and go unexpectedly, I still have plenty of playtime figuring out the environments, fight scenes, bantering dialogue, and so on. I’ve just given myself a head start by constructing the framework to hang it all on. I prefer to at least get a first draft on hand even if it’s a rather messy one. I can work with a mess. I can perform major writing surgery on a mess. But if I have nothing at all…it’s hard to work with that.

Once a first draft is done, it sits for anywhere from a week to a month before I look at it again, give it a revision/polish pass, and then usually send it out to beta readers for initial feedback. Then there’s another revision round based on that…and plenty more to come depending on editorial feedback, etc.

You’ve got my answers now.

All right. Thomas Fowler, Vivian Trask, and Nathanial Corres, you’re next in line! Go check them out, folks.

By day, Thomas A. Fowler is a Broadcast & Digital Producer at Vladimir Jones, a Colorado based full-service ad agency. By night, Fowler is a writer of commercial mainstream and science fiction. He does this sometime in between being a husband and a father. He pursues both dreams to prove to his children that they can accomplish their goals with dedication, education, and lots of hard work. In everything that he does, he ensures that he instills hope.

Vivian Trask is the production team leader for WordFire Press. In her spare time she also works as the assistant to WordFire’s managing editor and freelance edits for a variety of authors. Although she bemoans the age of computers that have made the red pen obsolete, still enjoys the sight of a properly edited novel. When not editing, she writes across all genres of speculative fiction, and especially loves weird westerns and science fiction. While doing all of these things, she drinks copious amounts of tea which she’s told will help her retain her sanity. So far she’s not convinced. But she’s too wired to really tell. She lives in Colorado with her husband, their dog who thinks he’s a werehuman, and a supergenius cat.

Nathanial Corres is a Pirate Poet, Limy and general all-around layabout. He lives where he hangs his hat and his cat finds agreeable to sleep. He has two books of poetry published on Kobo and is working on a series of Sci-Fi/Steampunk/Action Adventure/Comedy/Romance send-up of early silver screen heroes called: Camden’s Follies.