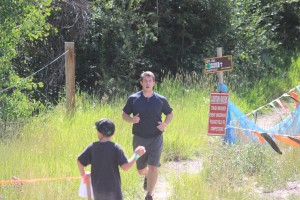 I’m not a runner.

That said, I do run rather regularly. For the past few months, I’ve averaged two runs a week, usually between 4-10 miles. Over the past few years, I’ve done a couple half-marathons, a few 10ks, and a growing number of obstacle course races. Last Saturday, I also completed my first Tough Mudder on an 11-mile course with 20+ obstacles. Took me about 3 hours and 20 minutes.

But I’m not a runner. That is, I don’t identify as one. I run, yes, but I’m not a runner. Does that make sense? In my mind, runners are those people who seek out running for the actual joy or pleasure of it. For them, running is more of an escape, a passion, even a lifestyle. They run for the views along the trail, for the joy of finding their groove, or clocking faster mileage times. In all the years I’ve included running in my fitness routines, I’ve kept a pretty plodding pace of 10-minute miles, with minimally faster times when the route is mostly downhill.

I have to go to great lengths to push myself out the door and into that warm-up jog. In fact, the only way I’ve consistently managed to motivate myself into running lately is with the Zombies, Run! app. With that and an energetic playlist, I run less for the physical benefits and more so I can unlock the next story chapter and build up my virtual post-apocalypse base with resources I picked up along the way.

For me, running has to become a game for it to be satisfying or hold any allure. There has to be a challenge beyond putting one foot in front of the other. It has to have a purpose beyond getting from Point A to Point B (or, since I often run loops, Point A to Point A).

That’s why the Spartan Races and Tough Mudders have really hooked me. Yes, they involve 5-12ish miles of running, depending on the particular course, but they also involve 10-foot walls to clamber over, mud pits to slog through, electric wires to dash past, and ice baths to plunge into. They’re interesting. They provide a unique challenge that incorporates endurance, strength, agility, focus, and even things like teamwork and camaraderie.

It makes the running just another facet, just one piece of a health and fitness whole. I know that if I train consistently on my runs, then I’ll be able to deal with the obstacles themselves much more efficiently. The running can sort of fade into the background and I can eagerly anticipate how I might handle a wall leap or rope climb. If I go onto the course barely able to jog a mile, though, then I’ll be far more drained and struggle to find any enjoyment the rest of the way. 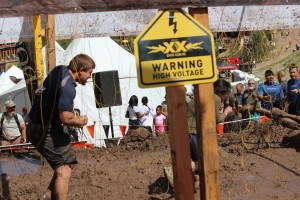 Is there a point to all this beyond me grousing about running? I’m sure there are a few things all this could point to, like…

What about you? What’s that “thing” you keep doing despite not really enjoying it in-and-of itself (whether in your fitness, your writing, your relationships, whatever)? How does working on this unattractive/unappealing thing contribute to healthier perspectives or better performance in other areas of life? How do you motivate yourself to put nose to the grindstone, recognizing it’s truly to your benefit in the end?