So, I’m delighted to be up for a Scribe Award this year! These are the awards given by the International Association of Media Tie-In Writers, and it’s an honor just to be nominated. My Pathfinder short story, Hunter’s Folly, is up against some stiff competition (including Jennifer Brozek, who agreed back at Origins Game Fair that we are now nemeses…and if neither of us wins, we’ll join forces to eat the winner). 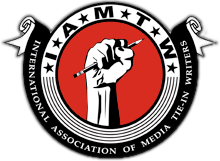 Anyhoo, the Scribe Award winners will be announced at San Diego Comic Con on July 10th. They’ve got a panel combined with an award ceremony, looks like. However, myself and a couple other of the people listed as panelists won’t actually be there. I’ll have a friend in attendance in case the stars do align in my favor, but if you pop in hoping to say hi, you’ll have to give me a long-distance halloo, as I’ll be all the way over at ConnectiCon. If you’re there, do drop by the WordFire Press booth or the panels I’ll be doing with a bunch of other authors. Schedule forthcoming for that.

Oh, and if you want, you can read Hunter’s Folly and my other Pathfinder shorts for free here. Winners are decided by a panel of judges rather than outside voting, but hopefully you’ll still enjoy the read.

Best wishes to all the other Scribe Award nominees!